Highlights
• ALAD with LED irradiation exerted a potent antibacterial activity both Gram+ and -.

• The higher effect was obtained with 1 h of gel plus 7 min of LED irradiation.

• 25 min ALAD plus 5 min of LED led to a high antibacterial effect.

• A certain antibacterial effect was measure also without LED.

Antibiotic resistance is a major public health problem worldwide and the finding of alternative methods for eliminating bacteria is one of the prerogatives of medical research. The indiscriminate use of antibiotics in dentistry, especially for the treatment of peri-implantitis, could lead to superinfections.

Alternative methods, like photodynamic therapy mediated by the use of aminolevulinic acid and a red light has been largely described, especially in dentistry, but results were encouraging against Gram-positive bacteria, but limited against Gram-negative.

The effectiveness of photodynamic therapy mediated by a novel product containing aminolevulinic acid, Aladent (ALAD) has been tested in this in vitro study, against different types of bacteria particularly involved in the infections of the oral cavity and peri-implantitis. The novelty of ALAD is the marked hydrophilicity that should increase the passage of the molecule through the membrane pores of Gram-negative bacteria.

Considering the novelty of the product a preliminary experiment permitted to test the effectiveness against Enterococcus faecalis after 1 h of ALAD incubation at different concentrations, with or without different timings of LED irradiation. The count of CFUs and the live/dead observation with fluorescent microscopy showed a significant reduction and killing of bacterium.

Then, in the second stage, that could meet the necessity of effectiveness and the clinician’s requests to reduce the timing of treatment, ALAD, with and without irradiation, was tested on Staphylococcus aureus, Enterococcus faecalis, Escherichia coli, Veillonella parvula and Porphyromonas gingivalis.

In particular, the efficiency of different concentrations of the product after a 25 min incubation was tested with and without the adjunctive LED irradiation for 5 min.

A slight ALAD bactericidal effect was reported for all bacteria, also without LED irradiation, however, the most effective treatment was 25 min of 50% ALAD incubation followed by 5 min of a red LED.

The in vitro tests demonstrated that ALAD gel with LED irradiation exerts a potent antibacterial activity on different bacteria, both Gram-positive and Gram-negative. 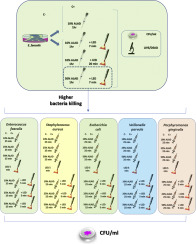